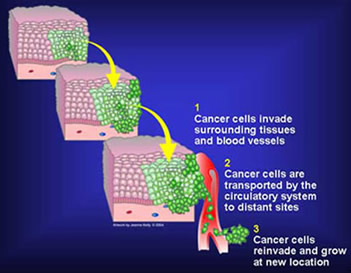 Cancer begins in cells, the building blocks that make up tissues. Tissues make up the organs of the body. Normally, cells grow and divide to form new cells as the body needs them. When cells grow old, they die, and new cells take their place. Sometimes, this orderly process goes wrong. New cells form when the body does not need them, and old cells do not die when they should. These extra cells can form a mass of tissue called a growth or tumor. Tumors can be benign or malignant.

Cancer cells can break away from a malignant tumor and spread to other parts of the body. Cancer cells spread by entering the bloodstream or the lymphatic system. The cancer cells form new tumors that damage other organs. 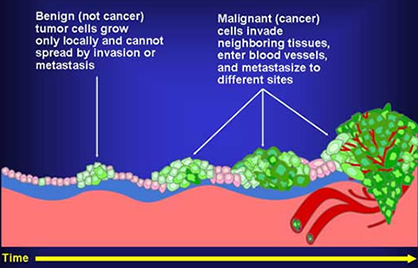 When cancer spreads outside its original site, which is called metastasis, cancer cells are often found in nearby lymph nodes. If cancer cells have reached these nodes, they may also have spread to other lymph nodes or other organs.